Origin of the Tennosui Pear

Bill Adams, presently a retired Harris county extension service agent, collected seeds from a pear butter project when he was working for the extension service and he and Tom LeRoy, another extension service agent who is now in the Conroe, Texas area, planted the seeds.  They had about 33 trees come up, and one had the flavor of a melting European pear with few grit cells and the crispness of an Asian pear; one of the best tasting pears I have eaten.  The skin is russet and a little tough, so I would recommend peeling the skin before eating.  Dr. Ethan Natelson M.D. our local pear expert and pear collector thought it kind of looked like a Hosui and he named it Tennosui since it did come from a Tennessee pear and there is a Hosui pear tree in the orchard.  It is a nice looking tree, growing in the Harris county demonstration orchard.  The number of chill hours is still being determined.  Dr. Natelson has speculated that it might be as high as 600 hours.  I grafted a branch on to a Bradford flowering pear last year (2006) in Angleton, Texas, and this spring it has 6 pears on a graft that is only about 3/8 inch in diameter.  All 6 pears developed and 4 were eaten by birds before I could taste them.  The other two I got to eat and photograph.
Update:  In the summer of 2009 the tree bore so many fruit that it broke a one diameter branch. I forgot to count the fruit, but it was a bunch.  The fruit continued to ripen and we enjoyed them all. 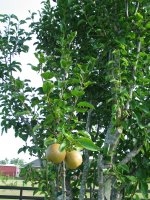 It seems to be a fairly vigorous grower and so far has resisted fireblight.  I grafted a branch on to a calleryana pear rootstock and gave the tree to my daughter (spring 2007) in Plano, Texas, to test it for chill hours.  She reports that it is growing vigorously although the person that cut her yard (not her husband) severely damaged the bark with a weedeater. 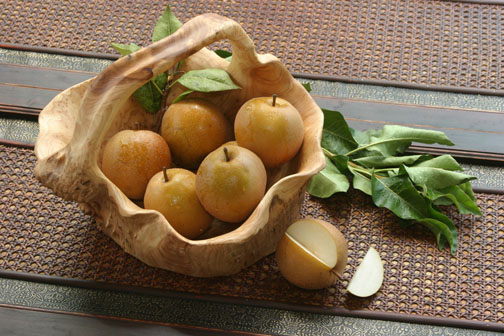 Additional comments by Dr. Natelson:
Another benefit is the failure of the pear to oxidize when cut open - it just remains white, rather than browning.  This would suggest its anti-oxidant content is very high and makes it more appealing to serve in slices in salads.  It is directly compatible with P. calleryana and P. betulaefolia and also directly compatible with quince.  On quince BA 29-C it is a slow grower, but much more vigorous when grown on chanomeles-type quince rootstock.  When grafted to other cultivars, the growth is quite variable from vigorous on Leona to very slow on OH x F 513, but vigorous on OH x F 51.  We have seen some minimal blight on the tree.  The original tree, on its own roots, is moderate in size.  I think it will have a somewhat spreading character when grafted in an open yard.

-  1 lb of fresh strawberries washed and the calyx removed
-  3 or 4 Tennosui pears cored, peeled & cut up
-  Juice from 1/2 lemon (in my case I use 1/4 Panzarella lemon)
-  1 can of concentrated defrosted frozen apple juice undiluted