Bloomsweet Grapefruit:  Bloomsweet is a lemon-flavored white grapefruit with yellow skin that is shaped like a large pear.  You peel and eat it like a tangerine.  The Bloomsweet originated in Japan and was probably a Kinkoji then somehow made its way to Texas.  It was grown in San Leon, Texas, by a Mr. Bloom until his death many years ago.  He called the grapefruit Bloomsweet.  This is my wife's favorite grapefruit because she could take these to work and not have to worry about spooning out the segments.  The seeds come true. 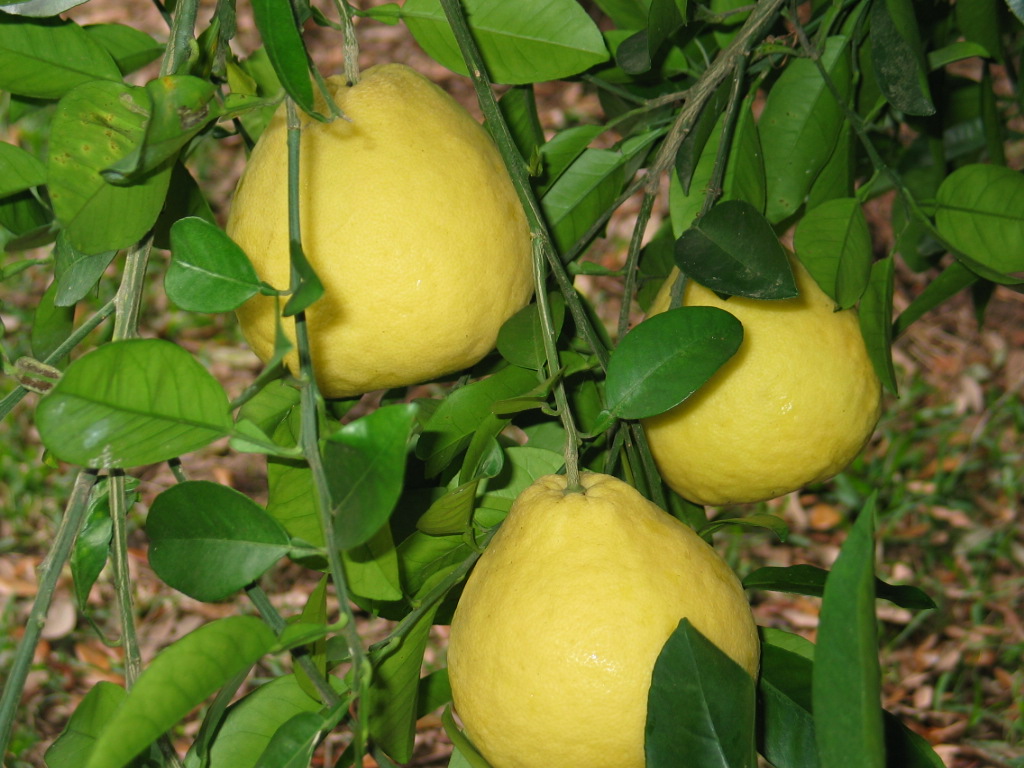 Chandler Pummelo:  This is the largest citrus that I grow.  It is best eaten with the juice cells separated from the membrane (click here on how to do it).  It needs to be picked and eaten in November for best flavor.  The seeds do not come true. 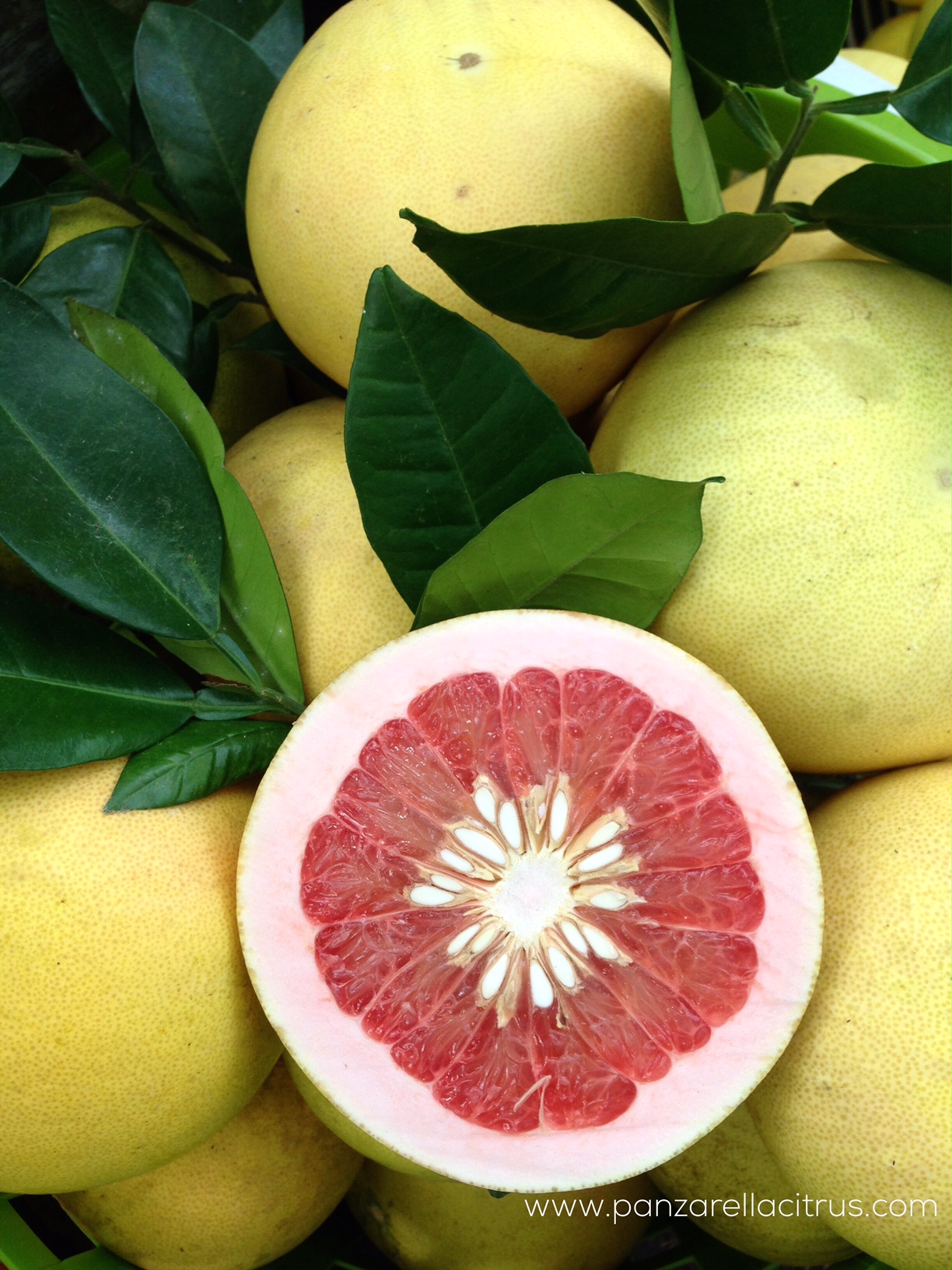 Changshou Kumquat:  The Changshou Kumquat has a larger and thicker sweet skin than Miewa Kumquat.  It can be tart inside if picked too early.  You can eat the whole thing - skin and all. 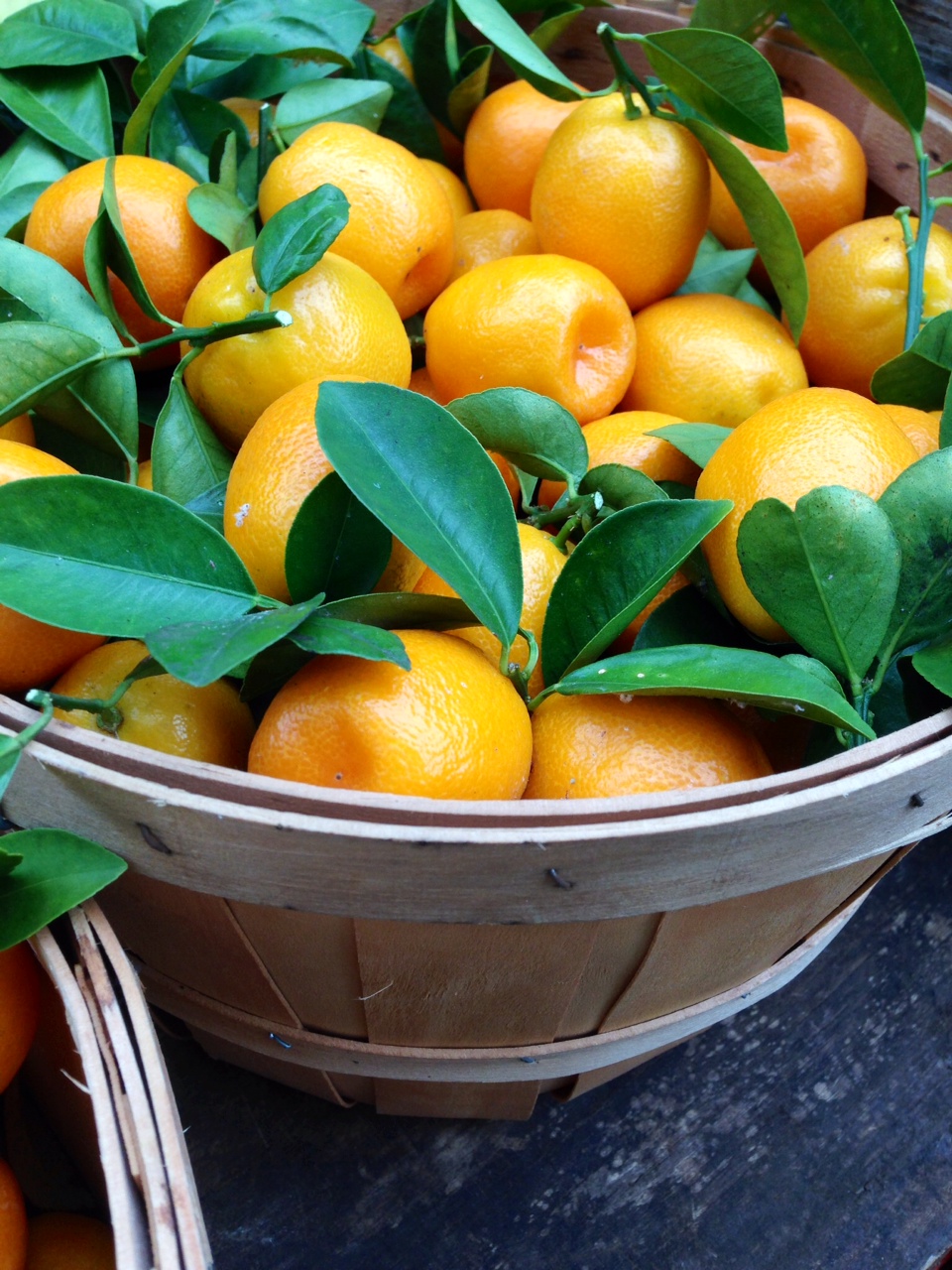 Fairchild Mandarin:  The Fairchild is a bright orange-colored mandarin (tangerine), both inside and out.  It is a cross between the Clementine mandarin and the Orlando tangelo.  Unfortunately, it has a lot of seeds, but the taste is outstanding!  It is a little hard to peel, so you may want to cut it up.

Cluster of my Fairchilds.

Page Mandarin:  A cross between Clementine and Minneola tangelo.  Page is very similiar to Fairchild in flavor.  The fruit is smaller and slightly less seedy than Fairchild.  When pollenated, it is a heavy producer. 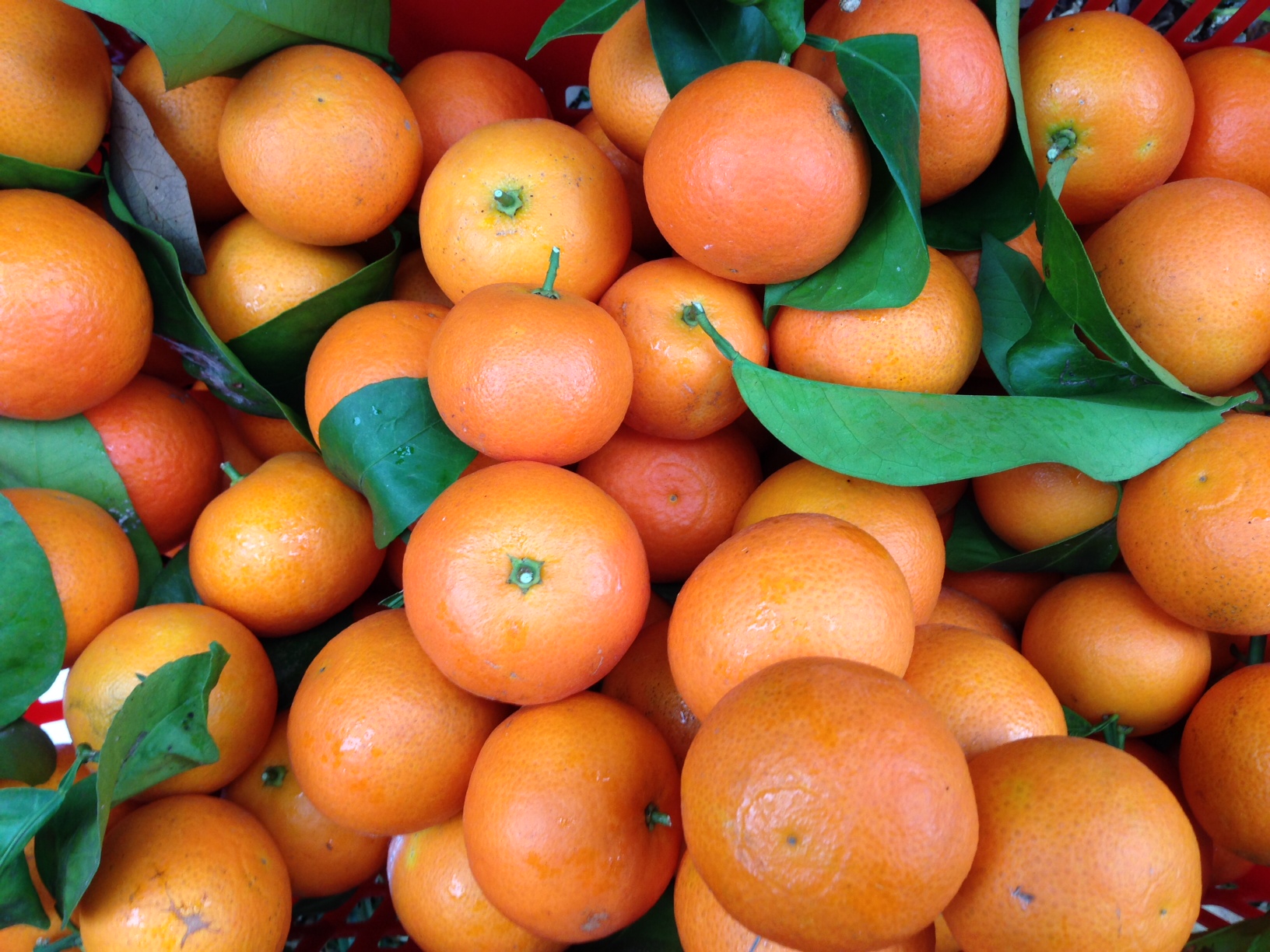 Golden Grapefruit:  The Golden grapefruit may not be a true grapefruit, and it has less acid than a normal grapefruit.  It does have a beautiful golden internal color and is orange flavored.  It can be seedy, but when planted, the seeds come true. 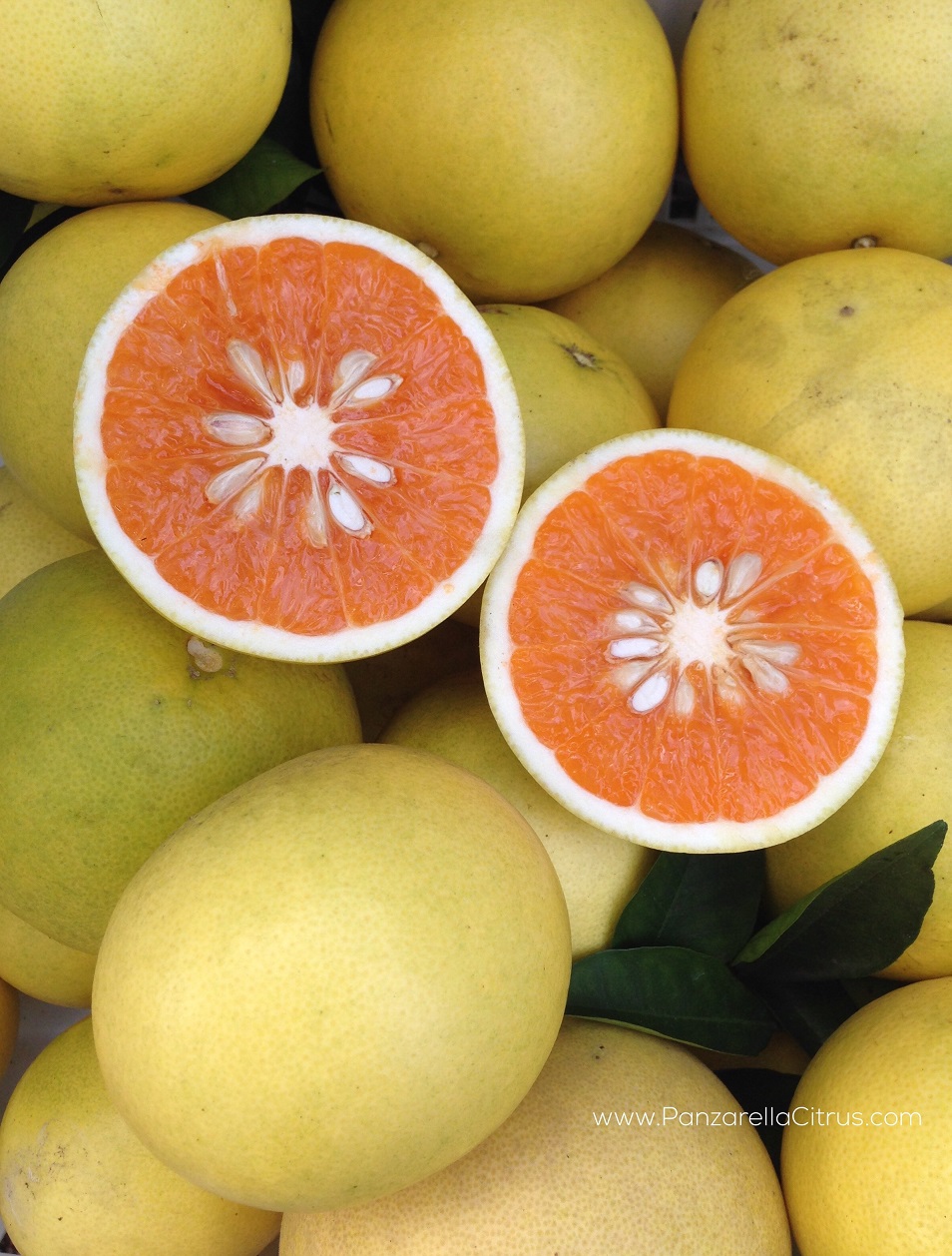 Meyer Lemon:  The Meyer Lemon sometimes is called the Texas Lemon or the Valley Lemon.  This lemon is less tart than an ordinary store lemon and slightly larger.  It can also be used like an ordinary lemon for lemonade or for a lemon pie. 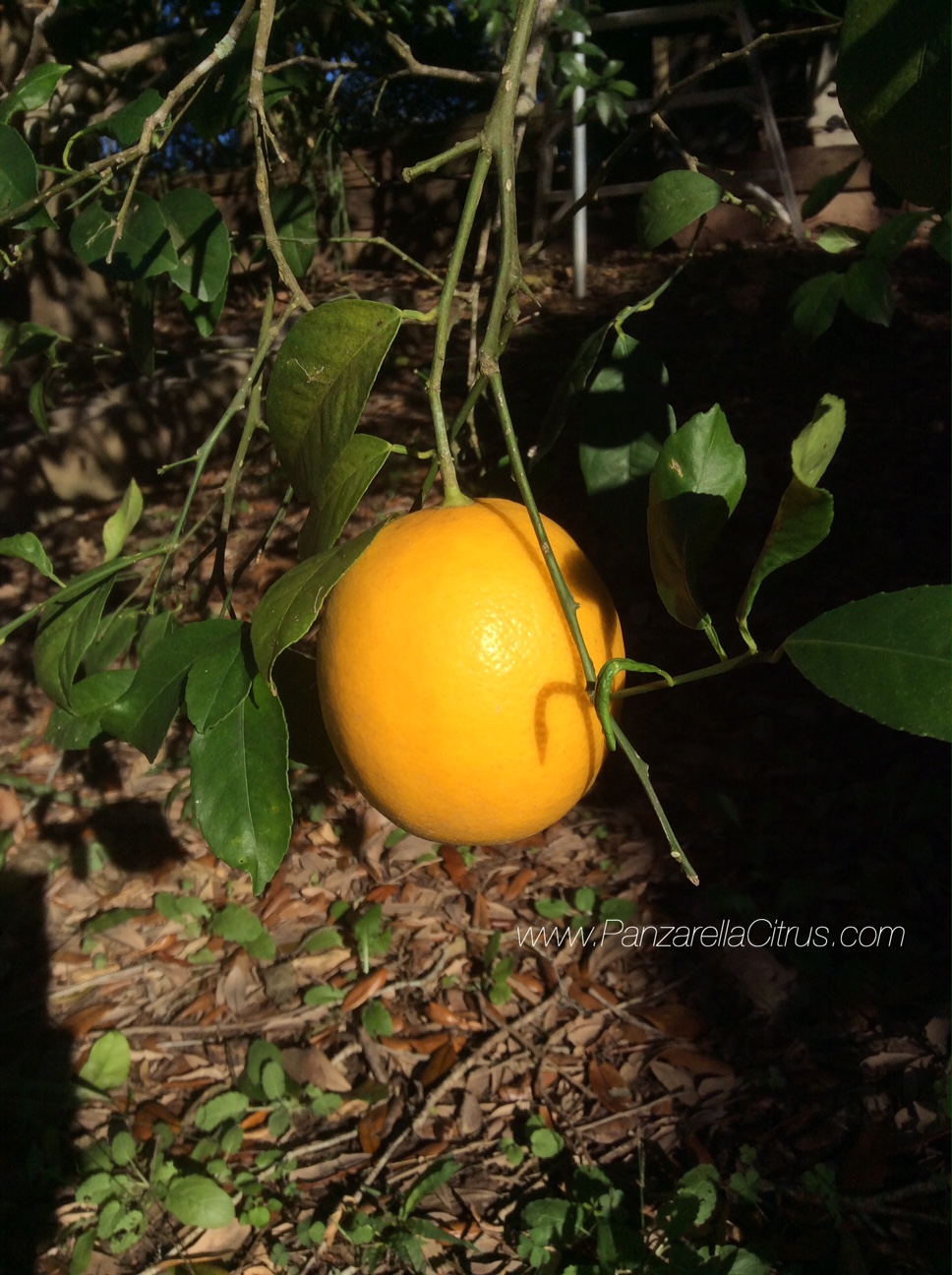 Miewa Kumquat:  The Miewa kumkquat is the size of a marble and very sweet.  You can eat the whole thing, skin and all.  It does have seeds. 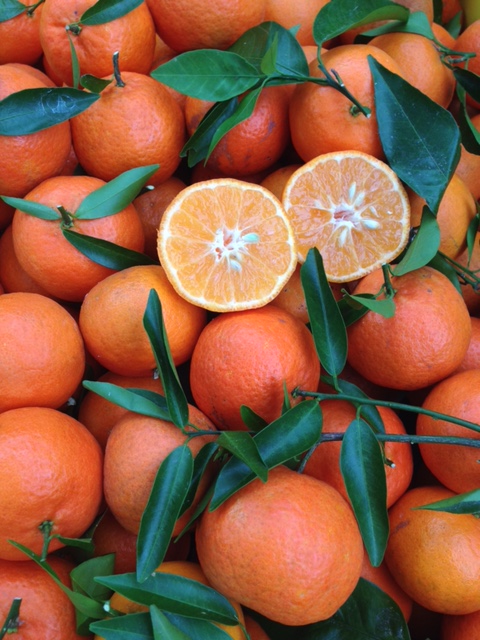 Moro Blood Orange: This blood orange has the best tendency to get red inside.  The red is due to a water souble anthrocyanin.  The pigment is beneficial to eat, but requires cold nights and warm days to form.  In my climate they never get totally red, but the flavor is still excellent. 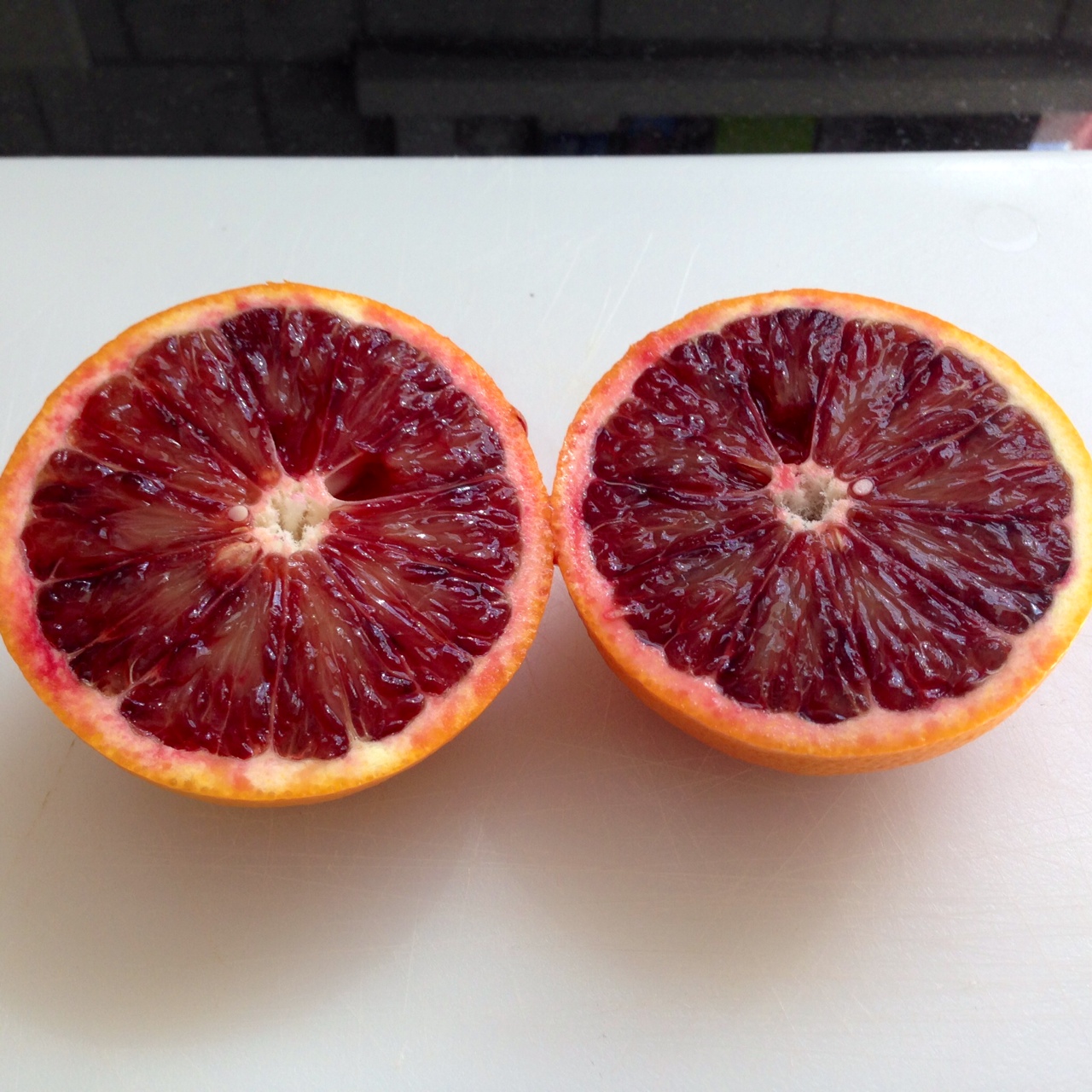 Nagami Kumquat:  The Nagami kumquat is a breakfast-sized sausage looking kumquat that has a sweet skin and is tart inside.  It is good for jelly only.  There is a seedless variety called Nordmann Kumquat that makes excellent marmalade.

Panzarella Cluster Lemon:  The Panzarella Cluster Lemon is a lemon tree that sprang up in my compost pile.  They are very large and juicy.  The lemon can grow into 10 lb clusters.  The fruit is characterized by a circle on the flower end of the fruit.  It has a moderate amount of seeds.  It sometimes takes an extra year to fruit when grafted or grown from cuttings. This is a very cold hardy lemon.  It took 22°F in my backyard without dropping a leaf! 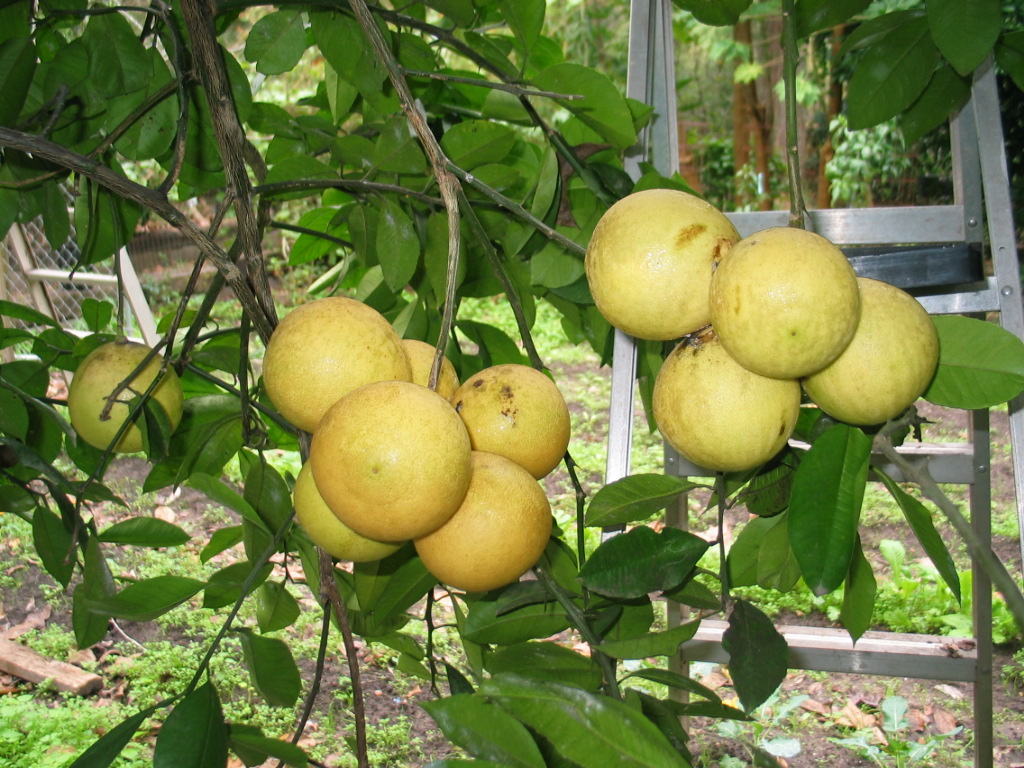 Panzarella Orange:  The Panzarella Orange is an orange tree that came up in my compost pile.  Its size is as large as a grapefruit and real juicy, but it also has lots of seeds.  The seeds do not come true.  Its mother may have been ujukitsu.  It defoliated at 22°F but came back strong. 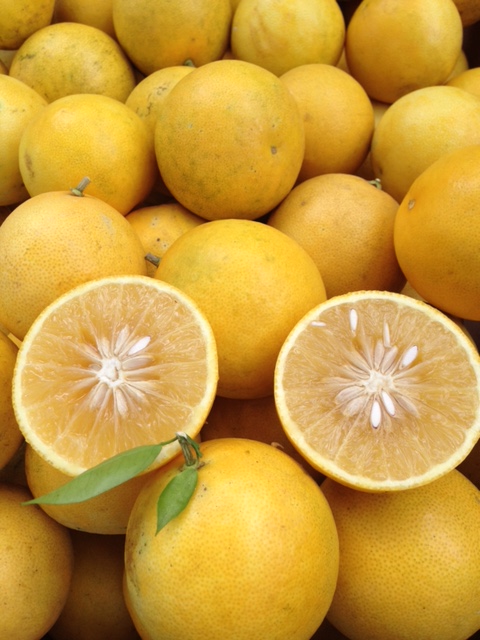 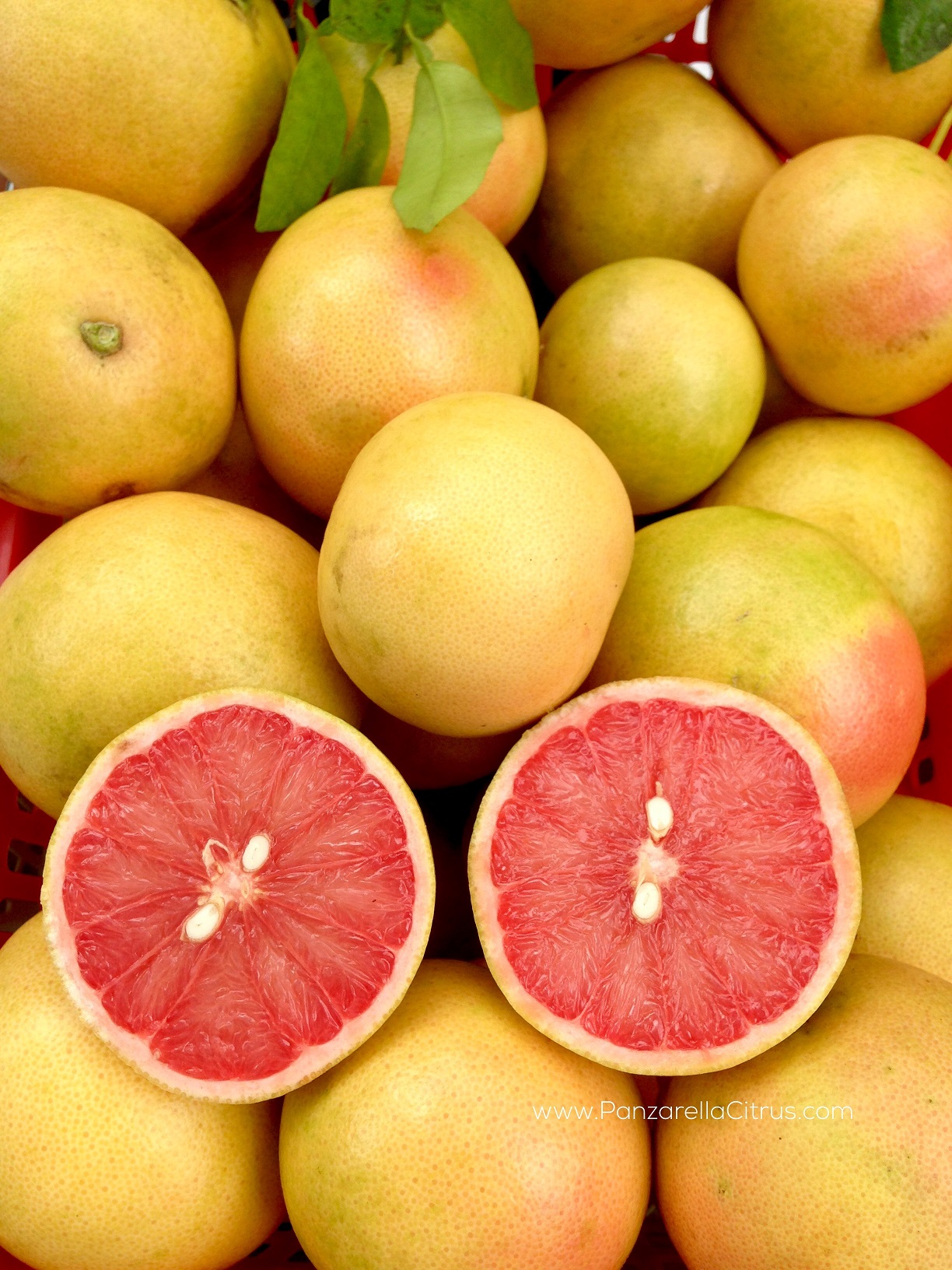 Sunquat:  The Sunquat is a cross between a Meyer Lemon and a Kumquat. Slice thin and eat the whole thing.  Sometimes they are tart, but it is much sweeter than a Meyer Lemon.

Ujukitsu Sweet Lemon:  The Ujukitsu is a rare sweet lemon from Japan.  It is shaped like a small Bloomsweet grapefruit. It is a yellow pear-shaped fruit.  Peel and eat like a tangerine.  No need to add sugar to this lemon!  The seeds do not come true.  This fruit is sometimes called a cross between an orange and a lemon.  This is not correct. 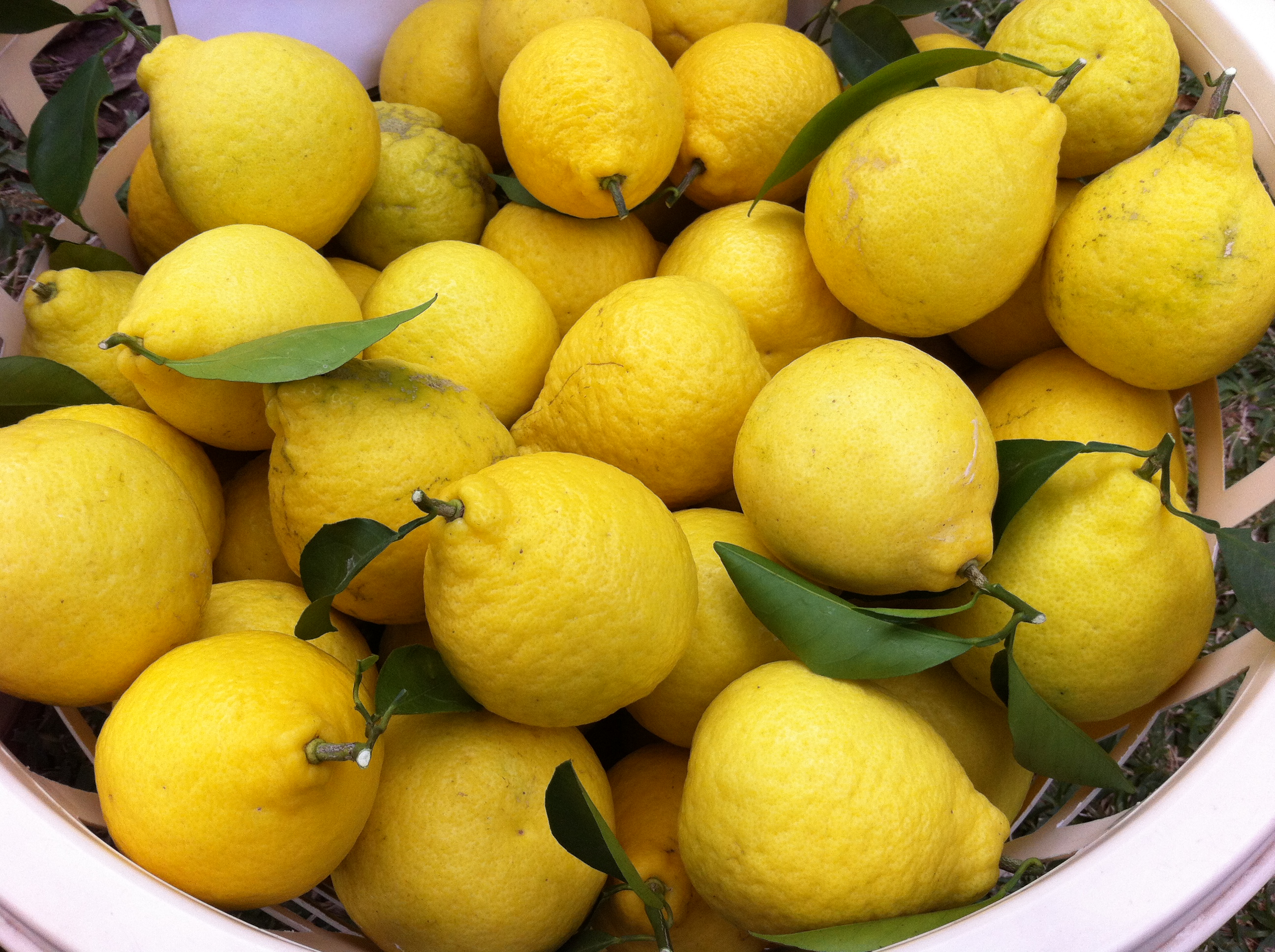 Wekiwa Tangelo: Wekiwa tangelo is a cross between a grapefuit (probably Duncan) and a Sampson tangelo (¾ grapefruit , ¼ Dancy tangerine). It has a pink internal coloring and is sweet. It really should be called a tangelolo. To me, it has no bitter grapefruit taste and is very good. 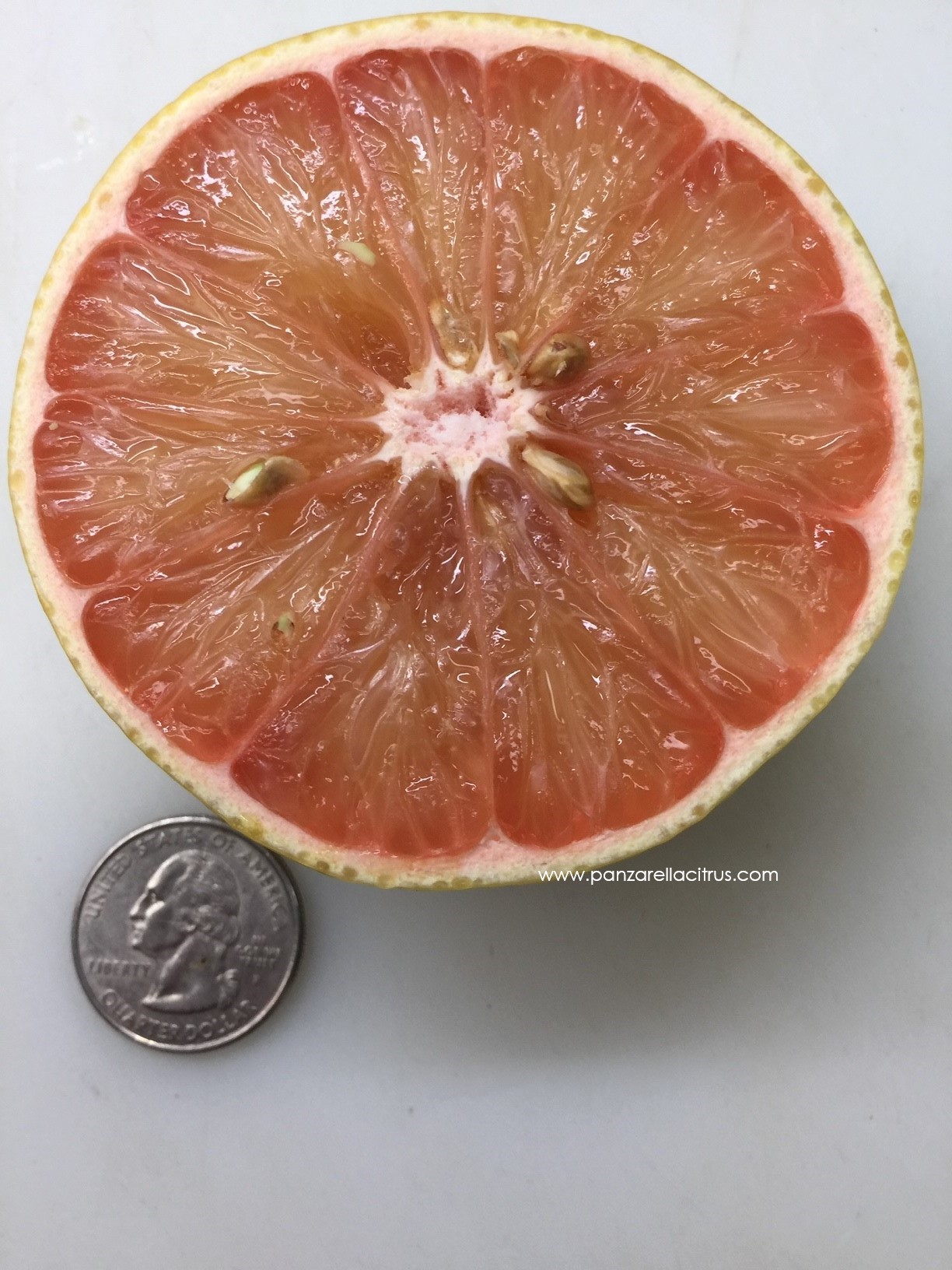 Hirado Buntan Pummelo:  There is some confusion on this variety.  In the Citrus Industry Vol. 1 the flesh is described a being a light greenish-yellow color.  In Florida it is described as being pink or red fleshed.  The Florida version may not be a true Hirado Buntan, but Ogami which is described as growing in Florida and red fleshed in the same book.  The Florida people describe it as the best tasting of all pummelos, and I think it is good but Chandler Pummelo is better. 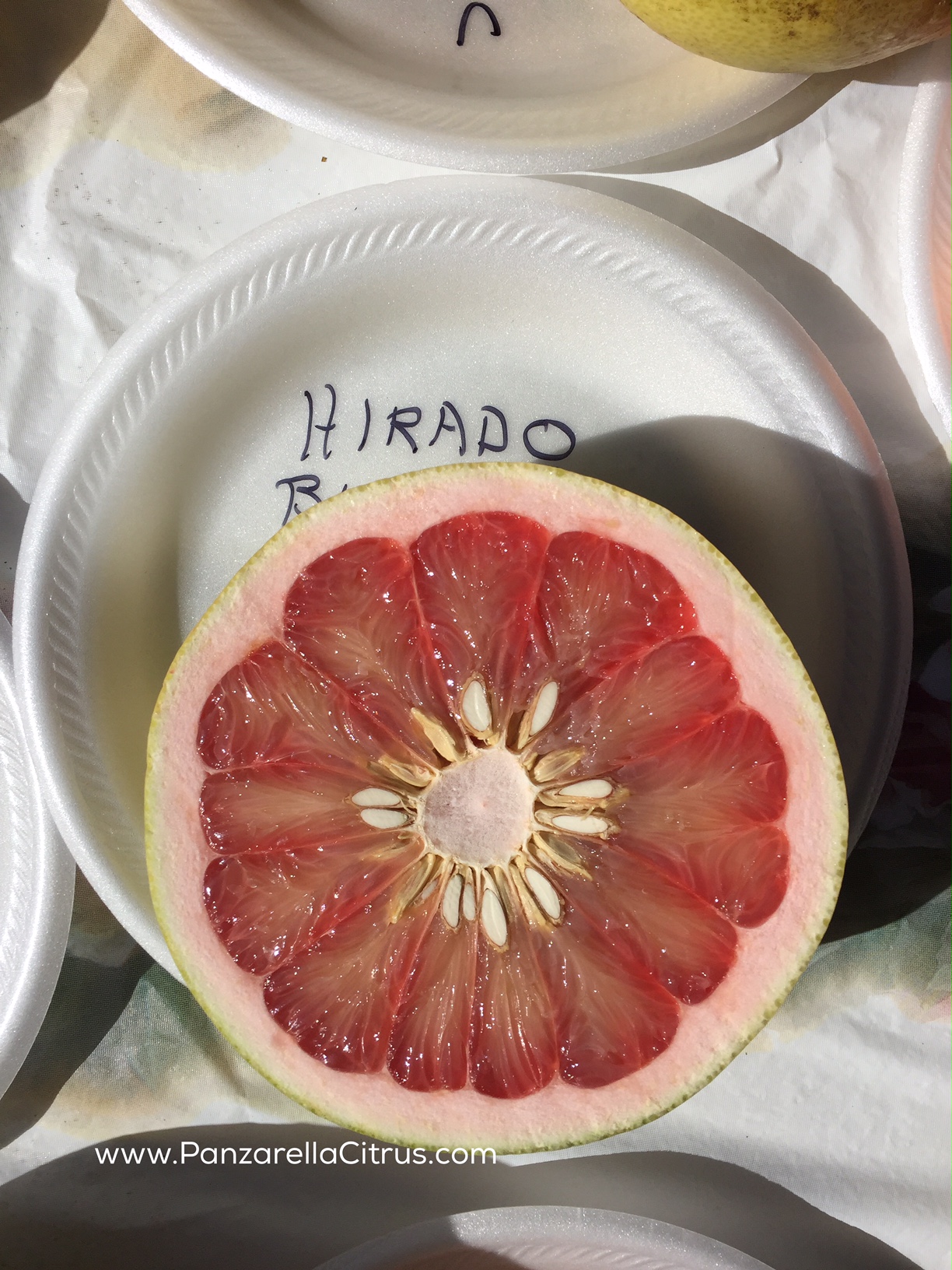 Sarawak Pummelo:  This is one of the sweetest pummelos I have eaten.  It is white fleshed and a little more juicy than Chandler.

For more detailed descriptions about citrus.